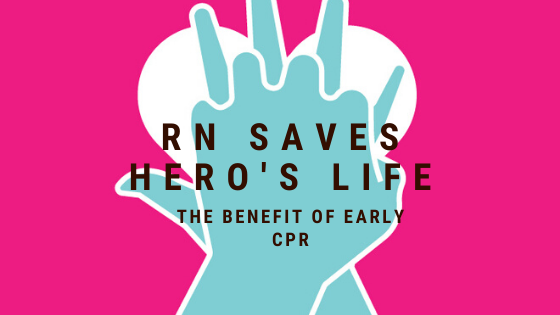 Nurses know immediate CPR and early defibrillation is what saves lives. This nurse put that concept into action in the best way possible. James Locklear was on his way to deposit some checks just after the New Year, and in an instant his life changed. He witnessed a head-on collision between two vehicles, and was appalled at the motorists that continued to drive on.

He sprung into action and ran over to the car. He proceeded to cut the side airbags away from the passenger side window to free a semi-unconscious passenger and get her to safety and away from the smoking car.

Amidst sirens responding to the accident James returned to his car to get the checks for the bank. Shortly after, he fell backward and lost consciousness.

Alison Wright, a Registered Nurse working in a nearby dermatology office, didn’t think twice. She saw someone yelling for help and ran to give aid. She quickly determined Mr. Locklear did not have a pulse and began chest compressions in the street. Her actions caught the eye of a police officer, Daniel M. Smith. He took over compressions and Alison grabbed the defibrillator.

After defibrillation and continued chest compressions James appeared to be regaining consciousness.

For any nurse that has done successful CPR, we all know that feeling of a patient looking into your eyes as you are compressing their chest with determination you didn’t know you had in you. It’s that magnificent moment of glory, happiness, and pride. Officer Smith was lucky enough to experience this feeling, and James was lucky enough to survive due to swift intervention and early CPR.

James lost his pulse twice more during transport, but arrived at the hospital in time to have three stents placed to his left anterior descending coronary artery. Yep, the old LAD. The ‘widow-maker’. His vessel was 95% blocked. (He has since quit smoking, made amendments to his diet, and has been compliant with his medications to ensure his longevity!) A Hero Returned to the Community

James Locklear is an editor for Native Visions, a publication dedicated to the Lumbee Indian tribe. He is an advocate for the community and his magazine is the largest owned Native American publication in the U.S.

Allison Wright’s prompt decision-making, superb ACLS skills, and drive to help all humans saved this man’s life. A pillar in his community, and a man who had just moments before, possibly saved the life of another.  Both her and Officer Smith are quoting James as the real hero. In classic nursing fashion, Alison pointed out that this was part of her job and duties as a nurse, while James acted without hesitation and completely voluntarily. Nurses love to downplay their actions, but we are an awesome profession! The classic quote is, “Save one life, you’re a hero, save 1000 lives, you’re a nurse”.

But, I think we all can agree, that all three of these extraordinary humans are truly heroes.