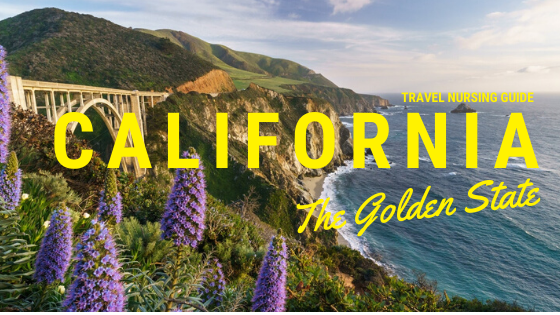 California is one of, if not THE most popular state for nurses to seek employment. Good pay, fair patient ratios with lots of resources, and an innumerable number of options for adventure and sunshine attract nurses from all over the country. It is also a great place to start your travel nursing career, as many hospitals are willing to take first time travel nurses. With its beautiful landscapes, sun-kissed cities, and terrific nursing pay, it’s no wonder it’s nicknamed ‘the Golden State’. The San Francisco Bay Area is one of the most popular cities for travel nursing. San Francisco and its iconic Golden Gate bridge draw people from all over the world. Its proximity to places like Napa, the norther California (NoCal) coast, Lake Tahoe, and Big Sur makes it a great place for exploring California. San Francisco’s hilly neighborhoods house some of the country’s most amazing food spots and unique entertainment options. San Francisco is laid back, industrial, and hipster all at once.

There are so many sites in and around San Francisco, it would take a completely separate post to list my love for them all. There is open space, beaches, hills, and almost anything you can think of in the San Francisco Bay area.

The city is also renowned for its extremely high cost of living, as well as its sister city, San Jose. Living with roommates or renting a room is a great solution to help reduce housing costs. Oakland is across the bay and also offers travel nursing opportunities and slightly cheaper living options. Just southeast of San Fran, Santa Clara is another popular city (and almost equally expensive) for travel nurses. Beyond San Francisco is a another side of Northern California (NoCal). The Central Valley includes Bakersfield, Fresno, Sacramento, and Redding. Other northern California cities that travel nurses love are Eureka, Santa Rosa, and Crescent City.  These places are popular with travel nurses because of their high paying jobs and relatively low cost of living (for California). Nurses love the rocky coastline where the cliffs meet the ocean and the marine life play not far from the shore. Some of the most beautiful parts of California are between San Francisco and Oregon. Explore the Redwoods, hike the Lost Coast Trail,  or take a road trip up the Highway 1 for some of the most scenic coastline in the US. Many of the healthcare systems that are present throughout California have a presence here. Almost every travel nurse I have met says they want to go to San Diego. The year-round nice weather, fun atmosphere, beautiful beaches, and killer sunsets add to the charm of San Diego. The cost of living only slightly trails San Fran, but there are more options for affordable neighborhoods and rental rates haven’t quite reached the the high rates of San Francisco.  Check out my San Diego Travel Nursing Guide for neighborhood information and tons of great entertainment ideas! The cost of living is high, but not nearly as high as San Francisco, and is very neighborhood dependent. Pay is comparable to other CA cities and jobs are plentiful. The major issue in LA is the TRAFFIC. Traffic is a problem all times of day on all major highways. And, ‘taking the side streets’ is not an option. Finding housing as close as possible to your facility would be wise.

The term ‘Inland Empire’ (IE) is widely used amongst California residents. For those unfamiliar with the area, it includes the cities of Riverside, San Bernardino, Palm Springs, Escondido, and Loma Linda. The lesser known wine region of Temecula is also located within the IE. The pay in this area rivals other major Californian cities, but you can find a lower cost of living in some of the IE towns. Rentals are still higher than the US average, but much more affordable than the most popular areas of California. There are tons of facilities throughout the region that hire travel nurses. When you live in the IE you can bask in the luxury of Palm Springs, make a quick 2 hour drive to Big Bear from some mountain sports fun, or drive 3 hours to the coast for an overnight trip. Stretching from Ventura to Santa Cruz, the California Coast draws dreamers from all over the nation. The most popular travel nursing jobs are found in Ventura, Oxnard, San Luis Obispo, Monterey, and Santa Cruz. Pay and cost of living can vary as both tend to increase the closer you get to LA or San Francisco. The towns are smaller and more charming, and the coast is a hot spot for surfing, swimming, sun bathing, and hiking. Highway 1 is the winding road that parallels the coast, and is one of the most popular drives in America. Big Sur (the section of highway between Carmel and San Simeon) is full of amazing sites, basking marine life, awesome camping and hiking, and has some of the most breath- taking sunsets you will ever see.

Exploring the vast space of California requires time and dedication. But for those who venture here, you will never be disappointed. (Luckily, there are TONS of travel nursing jobs throughout the whole state!) Swing by these sites for a satisfying taste of California’s classic scenery and beauty.

Best Time of Year to be a Travel Nurse in California

There is nice weather year round in some places. New extreme weather patterns from Bay Area to Sacramento to Tahoe are making the climate a bit more unpredictable, but you are still likely to see more mild weather than other parts of the country. Summer is the perfect time to see all the sites, but tourists  overwhelm the state and it can be packed at the most popular locations. There can also be wildfires in late summer/early fall due to excessive heat and lots of dry land. Travel nursing needs tend to increase in summer and spring as tourism increases.

Spring is best to see the flowers, waterfalls, and greenery that blankets the state. Snow can still be present at higher altitudes as late as July. Fall into winter is nice for skiing and you can stay warmer in the southern part of the state.

Average Pay and Cost of Living

I’ve already mentioned some of this information in the cities listed above. California is known for its high pay, but also for its ever-increasing cost of living. Some cities and regions have a better pay to cost of living ratio. To find these areas, look away from the coast and the major cities. As mentioned before, the highest cost of living is found in and around San Francisco. Utilize roommates or apartment shares to make the most of your paycheck.

Pay packages are traditionally more than $2000/week NET including stipends. And, any shift time over 8 hours will be paid as overtime (1.5x pay).

BONUS TIP: Some nurses will fly from home to the San Francisco Bay area, rent a room via Airbnb or other housing platform,  work multiple days in a row to fulfill a 2 week commitment, and then fly back home for a period of time before repeating the cycle- and they STILL make more money than they would at a staff job in their hometown, even with the cost of the flights. The pay is higher than some other areas in California due to the high cost of living.

California has one of the strongest nurses’ unions in the country. Hospitals tend to treat their nurses well and patient ratios are mandated. Break times are always honored and there is an extra nurse available to cover lunches. Because, if you watch patients for another nurse you would have too many patients, according to the patient ratio laws.

The popularity of California ensures a steady stream of staff and agency nurses to fill the schedule holes, and allow units to continue to meet the mandated patient to nurse ratios. This also means there are TONS of travel nurses to make friends with!

There are several large hospital systems such as Kaiser Permanenete, Sutter Medical Foundation, and Dignity Health that are present throughout the state. And, there are countless smaller community hospitals, some that are part of a larger network, some not. It’s nice to get into a system that is spread across the state and it can make finding your next job easier.

The last thing is, California has one of the longest licensing processes. Licensing can take awhile to process due to  the sheer volume of applicants. You can NOT go to the Board of Nursing office and obtain a temporary license, anymore. You must apply through the online BreEZe system. I recommend applying for your license at LEAST 6 months prior to your anticipated start date to avoid any additional stress in the travel nurse application process.

Explore the state of California with Nursefly.com!

1 thought on “Travel Nursing in California: ‘The Golden State’”