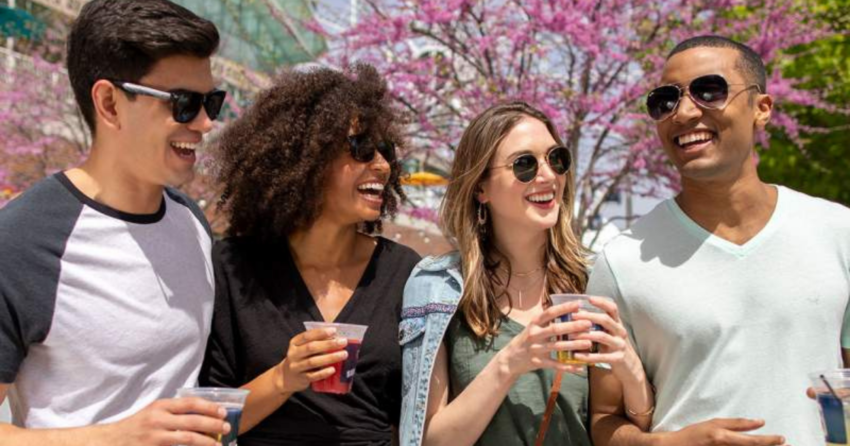 Known as the Prairie State or the Land of Lincoln, Illinois has four distinct seasons and an assorted landscape of farmland, rolling hills, wetlands, forests, and waterways, including Shawnee National Forest down south and Lake Michigan up north. From big bustling cities to charming small towns, this Midwestern state boasts a broad economic base and a wide array of attractions and fun things to do, including 309 state parks and recreational sites, 56 historical sites and memorials, museums and cultural institutions, live theaters, botanic gardens, theme parks, snow and water skiing, hiking and biking, shopping venues, and a piece of the historic Route 66. Illinois is also a foodie’s paradise with cuisine from around the world and the self-proclaimed best hot dogs and deep-dish pizza in the nation. These are just a few things that nurses in Illinois love about this great state.

Most of Illinois’ population lives in the north, primarily in Chicago and its suburbs, which is known as the Chicago metro or Chicagoland. Despite this huge urban area, about 75% of the state is made up of farmland. Central Illinois includes numerous small cities and towns with large agricultural presence. Illinois is the leading producer of corn, soybeans, and swine (aka oinkers). Southern Illinois features warmer winter weather than the rest of the state, appealing to those who prefer milder climates. Housing in Illinois typically reflects a 66% owner-occupied to 34% renter-occupied ratio. Chicago: Home to over 2.7 million residents, Chicago is the largest city in Illinois and the third largest nationwide. Nurses looking for an action-packed, cosmopolitan atmosphere will find it all in Chicago. Shopping along the Magnificent Mile, a thriving arts scene, Lollapalooza, world-class museums, iconic skyscrapers and architecture, and 15 miles of Lake Michigan beaches, the Windy City has something for everyone. It also boasts a diverse and active nightlife and ranked #3 in Best Foodie Cities in the U.S. with more than 7,300 restaurants. Chicago has spectacular parks, including Grant Park and Buckingham Fountain, and Millennium Park and Cloud Gate, voted #1 and #2 in Best Things To Do in Chicago, respectively. Nurses who are into sports can cheer for eight major league teams in Chicago, including the Bears, Bulls, White Sox, Cubs, Sky, and Blackhawks.

Living in a big city means a higher cost of living, which is 6.9% higher than the national average but housing is .09% lower. Groceries, healthcare, and utilities are also slightly lower. The City is defined by its distinct neighborhoods with their unique personalities and culture. Chicago nurses have 100 neighborhoods to choose from with popular options like:

Mount Vernon: Dubbed the Festival Arts City, Mount Vernon is a mid-sized city in the southern part of the state. Many residents of Mount Vernon work in office/administrative support roles, but healthcare services and social services employ the second most people. This includes SSM Health Good Samaritan Hospital, which is the third top employer in the city. Leading local attractions include the Cedarhurst Center for the Arts and the Hall of Honor and Military Museum. Outdoorsy Mount Vernon nurses enjoy the Rend Lake Recreation Area and Wayne Fitzgerrell State Recreation Area.

Mount Vernon boasts seven distinct neighborhoods with housing costs that are 75% lower than the national average. In 2020, average homes were $95,389 and the median rental cost for a two-bedroom was $650. The overall cost of living was also 30.5% lower than the national average with slightly lower costs for groceries, utilities, and miscellaneous goods and services, and significantly lower costs for transportation. Commutes are relatively short at an average of only 16.73 minutes.

Centralia nurses enjoy shorter commutes, averaging 17.58 minutes, and housing costs nearly 72% lower than the national average. In 2019, the median home cost was $67,700 and rental costs averaged $603 with four distinct neighborhoods to choose from. The city also has a lower overall cost of living index of 73.8% with groceries, utilities, transportation, and miscellaneous goods and services all lower than the national average. Centralia boasts a low crime rate and offers excellent schools and top healthcare centers like SSM Health St. Mary’s Hospital-Centralia.

Cost of Living in Illinois

Overall, the cost of living in Illinois is considered moderately inexpensive with a cost of living index of 95.8 in 2020 that ranked it 23rd most affordable out of the 50 states. While this is only lower than the national average by 4.2%, the state enjoys lower costs on groceries, utilities, and miscellaneous goods and services. The overall cost of healthcare is equal to the national average, but transportation costs are 7.7% higher. The biggest factor is lower housing costs, which come in at 13% less than the national average. Statewide, the average rental runs $974 with costs the highest in Chicago. Although the average apartment runs $1,800 per month in Chicago, this seems reasonable when compared to other large cities, such as San Francisco’s average of $3,600 and Manhattan’s average of $4,100. SSM Health Good Samaritan Hospital: Located in Mount Vernon, Good Samaritan is a 134-bed general medical and surgical teaching facility with a med-surg ICU and 24-hour on-site emergency department. It was rated high performing in treating COPD  and was recognized with a Citation of Merit Award for Outstanding Patient Care by Quest by Premier Inc. Good Samaritan also received a Guardian of Excellence Award for Physician Engagement and was honored by Healthgrades with Outstanding Patient Experience Awards in 2018 and 2020 and a Critical Care Excellence Award in 2021.

SSM Health St. Mary’s Hospital-Centralia: Located in Centralia, St. Mary’s is a 125-bed general medical and surgical teaching facility that has been serving the community for over 100 years. It includes a med-surg ICU and 24-hour emergency department and specializes in a wide array of care, such as maternity, cancer, behavioral health, and weight management, among others. St. Mary’s was rated high performing in treatment for COPD and honored by Healthgrades with Outstanding Patient Experience Awards in 2018 and 2019 and a Pulmonary Care Excellence Award in 2021.

Illinois is famous for the Chicago River, the only river in the world that flows backward, and the Sears/Willis Tower, the tallest building in North America. It’s home to the world’s first McDonald’s restaurant and the starting place for the Dairy Queen franchise. Illinois was also the birthplace of President Ronald Reagan and home to Presidents Abraham Lincoln, Ulysses S. Grant, and Barack Obama with plenty of historical sites tied to each of these great leaders. Other notable Illinois attractions include: Mermet Springs: The full-service dive site at Mermet Springs in Belknap offers scuba training and fun attractions like a sunken 727 Boeing airplane, an underwater petting zoo, and numerous underwater treasures to explore. It’s one of the most popular dive facilities in the Midwest with 15 to 120 feet dives and submerged training platforms. Mermet Springs is open from 9 a.m. to 6 p.m. Mondays and Thursdays through Saturdays with extended hours in the spring and summer. Visitors can rent scuba gear or bring their own. Entry fees are $25 per diver or $8 for non-divers with campsites available for an additional fee. Grant Park: This 313-acre park in Chicago is home to some of the most popular attractions in Chicagoland, including its centerpiece, Buckingham Fountain. One of the world’s largest fountains, it features a stunning water display every 20 minutes. Other attractions include The Field Museum, the Art Institute of Chicago, and Shedd Aquarium, a five-million-gallon aquarium that’s home to 32,000 animals. Grant Park is open daily from 6 a.m. to 11 p.m. with no entry fee required, but each attraction charges its own fee.

Chicago Transit Authority: Chicago’s extensive public transportation system offers an easy way to get around the city with its elevated train, aka L train, extensive bus system, and Metra Rail, a regional commuter train system with several stops throughout Downtown Chicago and neighboring suburbs. Fares with Ventra transit accounts are $2.50 for the L train and $2.25 for the bus. CTA passes are good for both and include one-day for $10, three-days for $20, seven-days for $28, or 30-days for $105. Metra Rail tickets are sold separately.

South Central Transit: SCT has intra-city shuttle routes that operate from 6:30 a.m. to 6:30 p.m. Monday through Friday inside the city limits of Mount Vernon and Centralia. Limited seating is offered on a first-come, first-served basis. Fares are 50¢ inside city limits with county shuttle fares at $2. There are no round trip tickets sold.

Best Time of Year to be a Nurse in Illinois

The best time of year to live and work in Illinois partially depends on which part of the state you’re in. Due to the size of Illinois, its climate can significantly vary from one region to the next. While most of the state has a continental climate with warm, humid summers and extremely cold winters, southern Illinois has a subtropical climate that results in milder winters. Average summer temperatures range from 70 to 85 degrees statewide, while average winter temperatures are 37 degrees in the south and 20 degrees up north.

Northern Illinois also gets more snow, often exceeding 35 to 40 inches with intense blizzards possible, while in the south, snowfall is typically less than 15 inches annually. Overall, the best times to be a nurse in Illinois are April, May, September, and October. The warmest months, June through August, are usually still comfortable. The worst times for working nurses are the fall/winter months when northern parts of the state experience frigid temperatures and bitter wind chills potentially between November and March.

Experienced recruiters are ready to help applicants compare 100s of jobs with potential employers in exciting Illinois cities. No matter what type of nursing or allied health position you’re seeking, NurseFly can match you with jobs at some of the most prestigious facilities statewide.